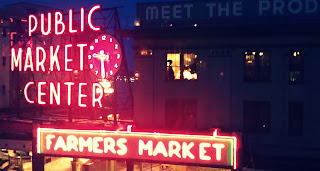 The age old battle for foodie city supremacy in the Northwest took to the kitchen this spring.  Now if you don't live in either Portland or Seattle let us set the table for this epic battle.  Seattle is home of Starbucks and a coffee shop on each corner, grunge music, Eastside techies working at Microsoft or a wireless company (who keep Starbuck's in business), engineers building airplanes at Boeing and the iconic Space Needle.  Portland definitely gets the nod for advanced city transportation (something that Seattle can't seem to figure out), taking eco-friendly to an entirely new level, bikes, microbreweries, roses, kicked-up sneaks (home of Nike) and who can pass up the guilt-free no tax shopping.

With the recent spotlight being placed on Portland with the hit IFC series Portlandia (written by and starring Fred Armisen (SNL) and Carrie Brownstein (Wild Flag vocalist/guitarist)), Seattle had to up the anti. One of our favorite restaurants Matt's in the Market (who can beat the view overlooking the famed Pike Place Market) decided to throw down the proverbial gauntlet and challenge not only Portland, but the  entire I-5 corridor to a food throw down in Seattle. Actually it ended up being far friendlier than that with the head chef Chester "Chet" Gerl hosting and collaborating with six acclaimed chefs from California to Canada.

So what was the intent of such an interesting line-up for the "Planes, Trains and Traveling Chefs" series that was comprised of a Master Chef, Iron Chef, James Beard Award winners and cookbook authors? We asked Dan Bugge, owner of Matt's in the Market, just that very question during one of the dinners we attended.

Dan explained that it really all came together when he and Chet were talking about their five years at the restaurant together and their wish list of whom they would love to have come cook as a guest chef to celebrate this milestone.  Apparently they had very diverse ideas and lists, but an all-star line-up none the less.  So they birthed the idea of the series by just starting to call and invite a bunch of these favorite chefs to come be guest stars in the restaurant.  He said they were surprised how willing these chefs were to participate in the series.


We were fortunate enough to go to two of the dinners in the line-up. The first was with James Beard award winner Andy Ricker of Pok Pok. He recently expanded his restaurant ownership outside of Portland by opening not one, but two new restaurants in New York City. In fact it seemed quite apropos that Andy flew in from NYC for the "planes" event and out the next day. Andy's food was an interesting use of Northwest ingredients fused with his Thai inspired techniques and sauces. Andy was recently featured in a Bon Appetite feature. If you want to try some of his recipes at home you can find them here.

The series of Planes, Trains, and Traveling Chefs offiically kicked off on April 16, 2012 with Gabriel Rucker, of Portland’s Le Pigeon and Little Bird restaurants. Rucker won the 2011 James Beard “Rising Star Chef of the Year” award and is the first Oregon chef to do so. We definitely plan to check out one of Gabriel's restaurant's next time we are in Portland since we missed him while he was in Seattle. 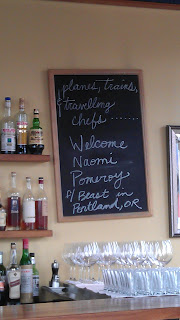 The second dinner we were able to attend and last in the series was with Top Chef Master contestant  Naomi Pomeroy. FloJo was super excited as she's been a huge Naomi fan since eating at clarklewis (no longer owned by Naomi). FloJo is equally a fan of her much smaller and intimate restaurant in Portland called Beast.  Naomi is a strong female chef that clearly makes food her way and has handled a lot of responsibility and pressure throughout her career. She balances motherhood while running a restaurant and juggling other engagements like Top Chef Master and this guest appearance in Seattle. We loved hearing how Naomi and Chet went shopping at the local Ballard Farmer's market the day before and created the menu from the fresh ingredients they found there. 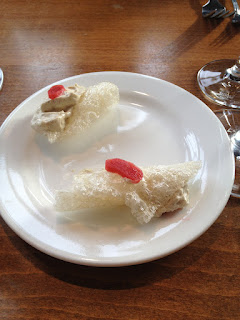 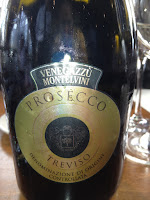 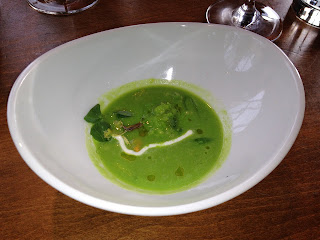 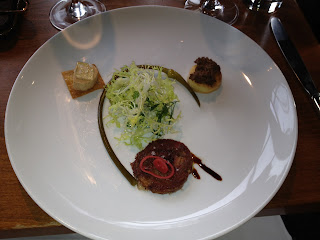 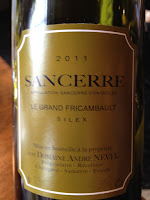 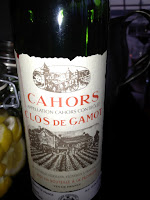 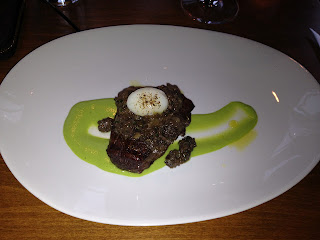 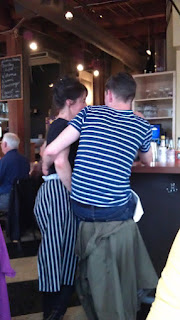 For the record, the Planes, Trains and Traveling Chefs series line-up read like the American league starting line-up at the annual Major League Baseball All-Star game: 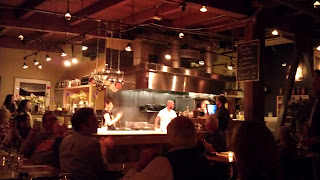 To check out Matt's in the Market's website and the Planes, Trains and Traveling Chef's bios click here.   Leslie Kelly wrote a fun blog on this series as well.  We enjoyed reading it and added her blog (side bar) as one of our recommended blogs.

Popular posts from this blog

Who Moved my Cheesesteak? 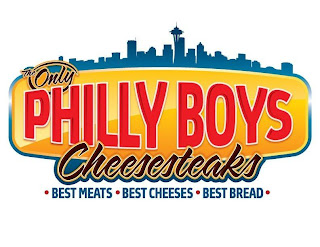 Betsy, our recent guest blogger, put the idea of melted cheese and thinly sliced grilled meat all wrapped up in delicious bun into our brains.  So we had to find some local West Coast versions of the Philly cheesesteak to satisfy our cravings.


We started with our go-to place Philly Boys Cheesesteaks, which we've been going to since they were a bright, yellow trailer (roughly the color of the cheese whiz used to make the cheesesteaks).  Now they've moved into a brick and mortar building right by where they were originally located with the trailer, which tells you business is good.

What's so great about this place?  Simple, they keep it simple-- crusty Italian bread, your choice of white cheese (Provolone) or "whiz" and thinly shaved, grilled meat.  The bread is from Borracchini's Bakery, an Italian bakery serving Seattle since 1922.  The meat's top round, it has onions mixed in and salt and pepper-- end of story.   Sweet pickled and hot peppers are available…
Read more 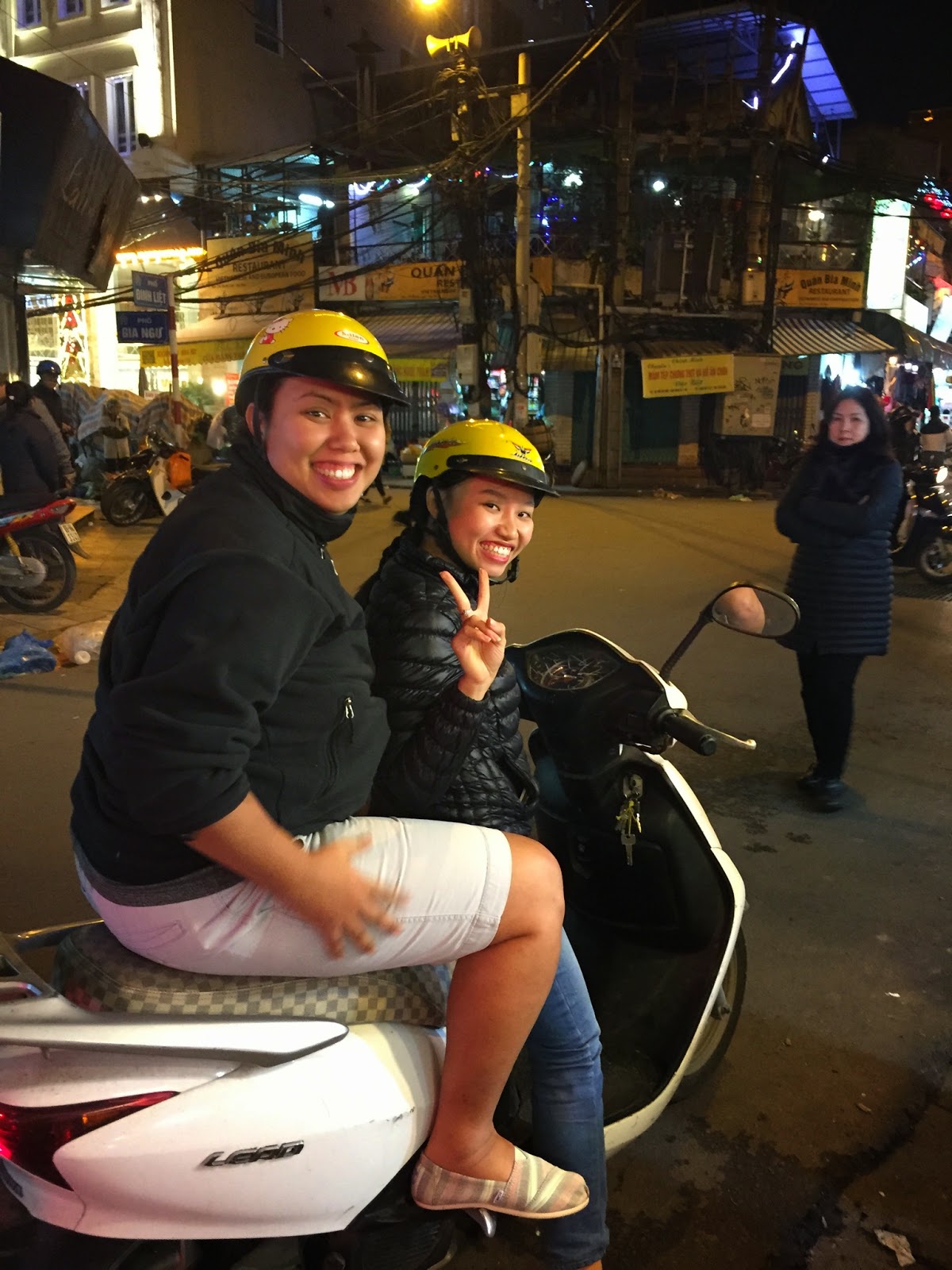 As mentioned in our last blog (Part One) our bus broke down in a small town in Northern Vietnam.  We were  making the best of the experience by enjoying some lively Australian company at a local coffee shop, but beginning to stress because we had booked a food tour back in Hanoi and the time to drive back was going to be very tight. Finally our repaired van did come to pick us up.  We arrived back in Hanoi about 5 minutes past our agreed upon pick-up time, which was pretty good considering the circumstances.  We were super excited to try an international food tour a) because we own a food tour ourselves in Seattle and b) because this one was on a moped--vroom, vroom!

The manager of the Hanoi street food tour and two young women with helmets were outside our hotel when we arrived ready to whisk us away. We paid the manager for the tour and never had to worry about paying for any of the food we ate again all night (and you'll soon read about just how much food that was)!  Our two v…
Read more

The Debut of Marination ma kai

What have we been most anxious for all summer (other than our trip to Italy)?  The highly anticipated debut of the newest Marination outpost in our backyard in West Seattle-- ma kai, which means along, near or beside the sea in Hawaiian.

The new location, ma kai is aptly named, as it sits where the former Alki Fish and Chips was located at Alki's Seacrest Boathouse (owned by Seattle Parks and Rec) right on the edge of Puget Sound with a killer view of the Seattle skyline.

Marination is co-owned by Kamala Saxton and Roz Edison.  Their Big Blue food truck shot to national fame when their Korean spicy pork taco won the Good Morning America national food truck contest in 2009.  We've been big fans for a long time as both of us love their Hawaiian-Korean fusion food.  It gives us both that everyday aloha feeling.  Ro even featured their food at her big Flirty Thirty birthday bash this past January.